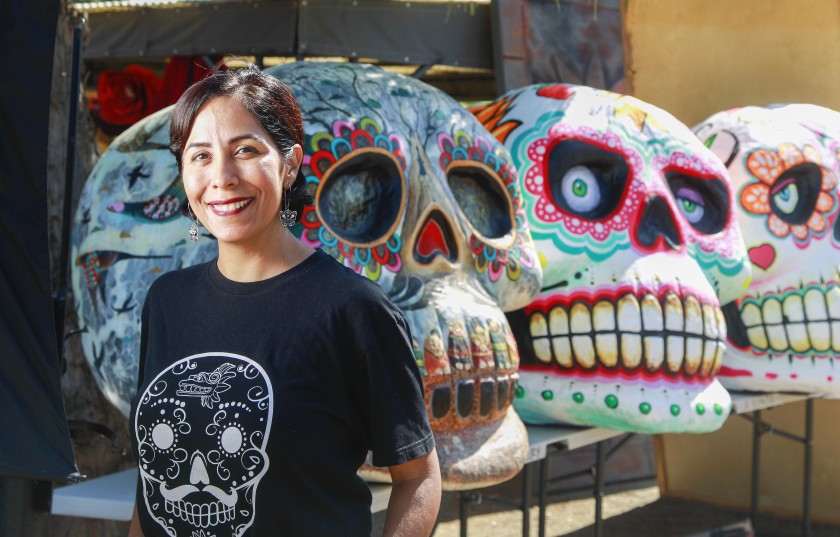 She is a mother, a spouse, a friend and a businesswoman. She most enjoys bringing life to a cemetery.

Luisa McCarthy says, “When people think of our cemetery, they smile and are filled with their memories, traditions, laughter, and kindness rather than feeling pain or fear or seeing it as the last place you would ever want to visit.”

McCarthy believes it’s because 11 years ago she took a risk and introduced the tradition of Dia de los Muertos to the La Vista Memorial Park in National City that she owns with her spouse, Micaela Polanco. She had never seen the rituals observed here. This was before the jubilant animated Disney fantasy film Coco introduced audiences all over the world to sugar-skull skeletons and brightly colored altars. Many people had no idea what Dia de los Muertos was all about.

Dia de los Muertos is a celebration of life. For McCarthy, who spent her early childhood and many summers in Mexico City, it was tradition to go to her local cemetery on Nov. 1 of each year celebrating children and babies, and on Nov. 2 of each year celebrating adults. Even as a child she became accustomed to going to a party to remember family members who had passed.

They prepared for the party by creating pot luck meals and going to the cemetery, bringing with them their chairs, blankets and the supplies to make the altars dedicated to their loved ones. The cemetery was filled with families who shared their food together as they visited their loved ones and decorated the graves.

“Every one brings marigolds, cards, candles, and pictures. Bright orange and easy to see buy accutane Marigolds have a potent smell and attract the spirit to the altar. The spirits are out on a long journey, they are thirsty so there is water, they are hungry so there is food, candles light their way and the burning of incense, called Copal, lures the spirits drawing them in. Together the families hire entertainment like Mariachi, Norteño and Marimba music groups that serenade each family for a couple of songs. They create a community visiting their beloveds in joy rather than sadness,” McCarthy said.

They pay tribute to their loved ones by telling stories. The younger generation learns the stories of their families that they would never have known. All the while she says, “We laugh, we cry we tell stories, we get angry sometimes because, after all, we are families.” That’s why she wanted to bring the traditions to La Vista Memorial Park 11 years ago.

She believes that the sacred traditions of Dia de los Muertos are something that can be shared with all nationalities because if there’s something that unites us: the feeling of losing someone we love.

“A skull has no sex, no religion, no gender, it’s just a beautiful soul. So this tradition can be embraced by everyone.”

She is glad to see people of diverse cultures, in addition to Mexican families, attend Dia de los Muertos because by learning and understanding the meanings people want to be part of it.

As the years passed, she noticed that people cared and respected the traditions, and she thought, “It’s working. Somebody cares.” Her intention is to share. She’s very proud of her Mexican and American roots.

With much reverence she tells the story of a husband and wife who had lost their baby boy. Every day since the burial his Dad would go to the cemetery — every day. He asked McCarthy about Dia de los Muertos. She took the liberty of suggesting that they build an altar to their son. He built his altar and thanked her. It was very therapeutic. He was able to talk about his son and share their son with so many people. They cried and they laughed. Now they build an altar for their baby every year.

In a world possibly tuned into technology more consistently than to matters of the heart, establishing the tradition of Dia de los Muertos at La Vista Memorial Park may be therapeutic for all of us.